Tucked away in the Mulyan precinct opposite the Cowra Baptist Church, and last mentioned in a $11,500 pre-election State Government funding announcement, it's not the first Cowra sporting facility locals would boast about.

But when I tell Carl Rodwell, who lives on the Rocky Mountain's foothills in the USA, midway through our phone interview that the park named after his father is currently used for local cricket, I sense palpable relief.

"As long as they're doing something with it, as long as it still has that name up there. That was named after my father," the 75-year-old, whose dad Aub was a council alderman, said.

It's been about eight years since Rodwell was in the country, and while he doesn't even have much time for the bat-and-ball sport - "[It] takes too long for anything to happen" - it's clear he's a man grappling with how the future will look upon his life's sporting achievements.

The former Boomer will be inducted into the Basketball NSW Hall of Fame this Saturday; an Olympian and the first Australian drafted into the NBA, his achievements speak for themselves.

However, his own involvement in the game was spurred by Cowra's post-WWII history, and is a fair way removed from the origin stories of current-day players like Ben Simmons or Matthew Dellavedova.

I still think it's quite miraculous that a kid coming from a small country town in central New South Wales would make it that far.

"It was introduced to us initially after the Second World War, it was an army camp that was just outside of town," Rodwell, himself born in 1944, said, with the military set-up soon turned into a site for newly arrived immigrants.

"They introduced the game to the community."

But, as Rodwell notes, it still took a while for the game to catch on and he and his friends weren't lacking for options: Swimming, rugby and even cricket were all routine activities.

"We pretty much did it all," he said. "If it didn't cost hardly any money we would do it."

However, basketball would eventually be added to that list.

"I was just a youngster and still didn't know anything about it until a couple of school teachers picked up on it," Rodwell explained.

"Cowra was a pretty good stronghold for basketball enthusiasts and players."

He admits looking back on it that his level of interest was befuddling.

"We're talking about the late 50s and early 60s. What would a kid - even though he'd been introduced to the sport - what sort of interest would he have in a game, that was pretty much foreign to all of Australia, not just Cowra?"

Nevertheless, it parlayed itself into his first major sporting achievement - an under 18s state title, a feat he achieved alongside his teammates from Cowra.

From this point forward though, Rodwell began, like many ambitious sports people from regional areas do, to look beyond his immediate surrounds for inspiration.

"Who in the hell could I say was a role model for me? I can't get anybody to name one for me either."

It was an observation and thought bubble that continued to linger in his mind, even once he moved from Cowra, and started playing basketball in Sydney.

"Certainly by 20 [years of age] I knew definitely that if I wanted to improve myself in the game, I had to go someplace else - to the game - because I sure wasn't gonna get it in Australia," he said.

But after that realisation dawned on him, it didn't take him long to find a pathway out of the country. Selected as part of the New South Wales team to play in the 1964 Australian Championships at South Australia's Forestville Stadium, Rodwell was picked to take part in what would be his only Olympics campaign.

However, while the Australian team, which also included the likes of Lindsay Gaze, Laszlo Hody and Michael Ah Matt, finished ninth in the nation's second appearance at Olympic level, the trip unlocked more than international playing experience for Rodwell.

Assistant coach Ben Hogan, an American high school coach who assisted the Australians with their preparation for the Tokyo Games, suggested that Rodwell should make his way over to the American college system. 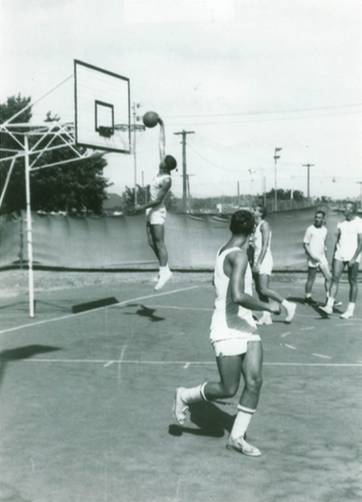 Rodwell was the first Australian to successfully play in the American college system. Photo courtesy of Basketball NSW and Carl Rodwell.

"I jumped at it," he said of his then 20-year-old self, holding today to his belief that his counterparts didn't receive similar offers.

"He never asked anybody else on the team, I can guarantee you that."

Eventually playing and studying at the University of California's Riverside campus, Rodwell would be the first Australian to successfully play basketball in the college system, and even today, his achievements stack up.

Across his four years of study, he finished as the team's then fourth highest all-time rebounder and scorer, while his highest individual score in a game for Riverside (38 points), is still to this day the fourth highest score in a single game put up by a Riverside player.

It is worth remembering that the rules were also different back then, meaning Rodwell's achievements need to be considered in light of the modern player's increased ability to score.

"There was also a shorter season and always less games."

When I ask him if he sees himself as a trailblazer, after he points out the fact that he was the first Australian to successfully participate in college basketball, he doesn't hesitate to answer.

"I do now, for sure! The avenues for kids to play beyond college and elsewhere are just a wide array now.

"I still think it's quite miraculous that a kid coming from a small country town in central New South Wales would make it that far."

While he admits he had some support from people back home, making particular mention of the likes of administrator Bob Staunton and Charlie Abbott, it seems clear that Rodwell also believes he was forced to rely on himself during large portions of his sporting career.

At one point in our interview, he wonders aloud what could've been if he and his under 18 state championship teammates had received a higher quality of instruction.

"We didn't have the right folks there to coach us along. Not only just coaching but technique and pretty much everything... we could've got better a lot faster."

The sense of what could've been runs throughout Rodwell's whole career, with an Australian basketball circuit developing at a different pace to Rodwell's own ability.

I knew definitely that if I wanted to improve myself in the game, I had to go someplace else - to the game - because I sure wasn't gonna get it in Australia.

During his time at Riverside, Rodwell would also lead the points per game average in Australia's failed campaign to qualify for the 1968 Mexico City Olympic Games, and a year later, 1969 was picked at the 1969 NBA Draft by the Atlanta Hawks, but didn't register a game.

The 217th pick at the draft - By contrast, the first Australian to play in the NBA, Luc Longley, went at pick seven - it is perhaps understandable that contrary to the lights and hype that greet number one picks like this year's Zion Williamson, that Rodwell's experience of the NBA environment was a little bit more down-to-earth.

"Getting drafted into the NBA is pretty much, or was, pretty much like a factory then, probably still is," he said.

"They just want a lot of bodies to be able to scrimmage and play, and see if there's some talent out there that might help them on their team in one position or another."

One particular incident sticks in his memory, with recruiters skeptical about the colour of his hair.

"My hair was very grey, it's just a genetic trait," Rodwell, who was 24 at the time, said.

"I know they were questioning that... I got a thank you letter later on saying, 'Thanks but no thanks.'"

While he completed a double major in art history and anthropology at Riverside, and minored in physical education, Rodwell received numerous offers to play in both Australia and abroad, but admitted other options were clouded by feasibility issues.

While one potential playing gig back in Newcastle included the offer of a job, Rodwell believes looking back now it was an obvious decision to turn down those kind of opportunities. 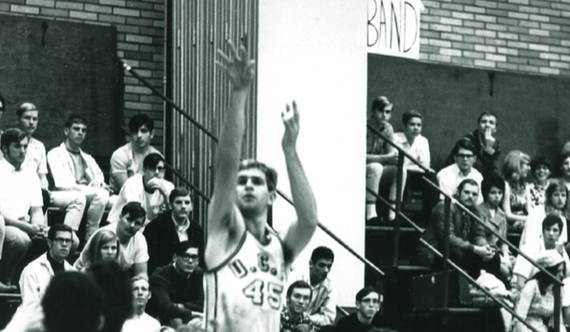 "[You] don't have to be Albert Einstein to figure out that that wasn't [a] very successful financial enterprise [for me]," he said.

Other opportunities soon would arise, allowing Rodwell to continue to see the world and continue to play basketball.

A sales and marketing role for Seagram and Sons, once one of the biggest beverage companies in the world, also kept him busy, though eventually, with a wife and three boys, a work transfer would see the family move to Colorado, where he and his wife currently live.

Basketball has continued to remain central, even as Rodwell's kids became adults. Rodwell continued to play with a Denver masters' basketball team up until a couple of years ago, where a series of surgeries means he currently uses a wheelchair.

It also means he's unable to attend Saturday's induction, and will instead appear via a video link to his residence.

While he is disappointed at not being able to attend, and generally looks back on his time in Cowra and Australia fondly, Rodwell doesn't regret the decision to leave all those years ago.

"[It's] not important necessarily for everybody, but I'm lucky in that I had the opportunity to go elsewhere and see what was on the other side of the world," he said.

However, as someone who wonders aloud whether he and other veteran basketballer's legacies will be appreciated by the twenty year olds of today - "Young kids don't want to know... They don't think us old fellas could play" - he nevertheless admits that Saturday's recognition, albeit one he can't be physically present for, is somewhat comforting.

"It's nice to be remembered, I guess."

Note (10/11/19): An earlier version of this article mentioned that Carl Rodwell went to Korea for work during his time Seagram and Sons, which wasn't the case. This sentence has been amended.