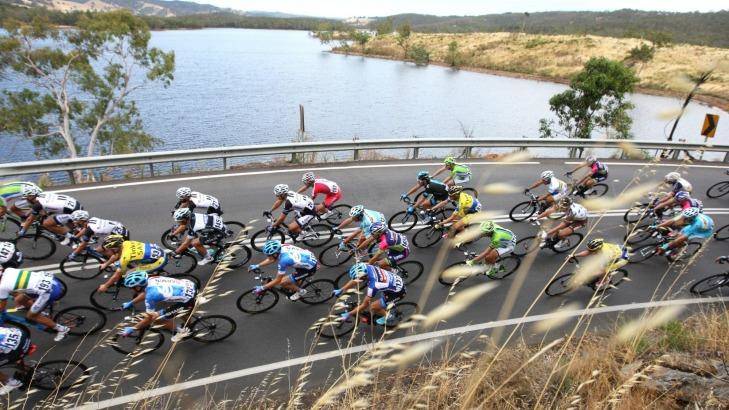 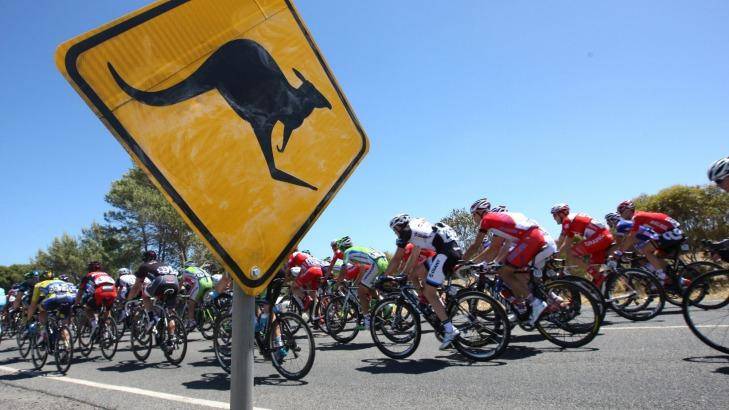 Kangaroos are a hazard on the McLaren Vale to Willunga Hill stage. Photo: SATC/John Veage 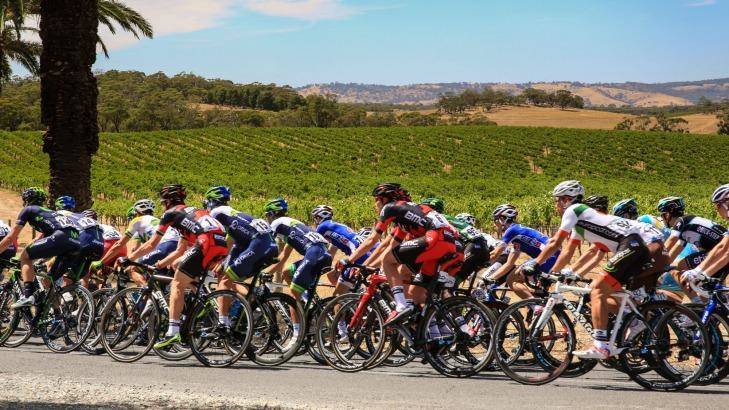 Santos Tour Down Under route is flanked by vineyards in Seppeltsfield, Barossa. Photo: SATC/Russell Mountford

Stuart O'Grady​ reckons he pedalled at least 700,000 kilometres during his 18-year professional cycling career. The champion cyclist competed in the Tour de France 17 times and collected a swag of prizes, including Commonwealth and Olympic gold medals.

But swilling wine with me in a marquee pitched among the grapevines of McLaren Vale is apparently the pinnacle of his career.

The winner of the inaugural Tour Down Under in 1999 (and again in 2001), O'Grady attended this year's event for the first time as a spectator.

"I used to ride past here at about 50k an hour looking at you guys drinking wine and think 'One day …'," he says.

It is hard to disagree with O'Grady's sentiments, given a choice between sampling a fine slate of Penny's Hill wines and joining the furiously pedalling peloton on the fifth stage of the Tour Down Under.

The six stages of the Santos Tour Down Under, which this year is on until January 24, takes in the vineyards of the Barossa and McLaren Vale, the orchards and villages of the Adelaide Hills, the lovely beaches of the Fleurieu​ Peninsula, as well as the streets of the South Australian capital.

Back at Penny's Hill Vineyard, the bonhomie fuelled by excellent wines and head chef Dioni Flanagan's cuisine is interrupted by the noisy arrival of the police.

Their sirens herald the motorcade that brings riders past the tent as they complete another circuit of the stage through McLaren Vale's rolling vine-covered hills.

Wine glasses are put down as we rush to the roadside to cheer riders as they hurtle past in a blur of lycra and bulging calves.

However, it is not long before our group of armchair athletes returns to the serious business of eating, drinking and merriment at the charity lunch hosted by O'Grady and SBS journalist Mike Tomalaris​ – one of countless community events held during the Tour Down Under.

South Australia's multi-day bike race is one of the world's best, according to Tomalaris, who has covered the Tour de France since 1996.

He describes the South Australian cycle race as "the complete package". "There's food and wine involved, there's scenery … This is like being at the Tour de France without having to be in France."

In some ways, Tomalaris says the Tour Down Under, which kicks off the UCI World Tour, is superior to the more famous French race.

"Sure, it's on a smaller scale, but if you go on the Tour [de France], nine times out of 10 you'll be stuck in a traffic jam," he says. "This is much more relaxing and not so different from what we see in France. The riders are saying this is the best event in the world for them."

After lunch, we make a quick dash to the Willunga Hill finish line to watch Richie Porte​ break away from the pack to sprint to the finish line closely followed by Tour de France champion Cadel Evans.

Watching the world's top cyclists zip through South Australia's loveliest wine and food regions certainly makes the Tour Down Under easy on the eye – and the palate.

As O'Grady points out, there are not many events in the world where you can take your family to watch the world's best for free.

There are also few world-class sporting events that allow spectators to rub shoulders with their sporting heroes, with a program of events ranging from the Tour Village and Bike Expo in Adelaide's CBD to the Legends' Night Dinner at the Adelaide Convention Centre.

Respected broadcaster Phil Liggett​ is an engaging host of the Legends' event, gently ribbing guest US cycling great Greg LeMond​, three-time winner of the Tour de France, about his triumphs and travails, such as being shot in a hunting accident by his brother-in-law.

After nodding off during SA Premier Jay Weatherill's​ welcome speech, my fellow diner David listens with rapt attention to Liggett and LeMond. A cycling fan from New Zealand, he describes how he fulfilled his dream to ride 1000 kilometres during the Tour Down Under.

The two-wheeled tragics have certainly caught the attention of Liz, the cellar door host at McLaren Vale's Coriole​ Vineyards, one of the hydration stops my peloton of spectators takes during the race.

"Every bastard that owns a bike is out today," she laughs as she dishes up homemade scones with plum ginger jam and cream.

She rounds off morning tea with one of the vineyard's top drops, the 2010 Lloyd Reserve Shiraz.

Later, we lunch at the Blessed Cheese cafe in McLaren Vale as MaMiLs (Middle-aged Men in Lycra) sit around tables talking clinchers, chains and cranksets, their flash bikes stacked nearby.

"If you're wearing lycra, we still like ya," reads a message chalked on a board outside the cafe.

Each stage of the race is greeted with community events ranging from the People's Choice Undies Run, which features the loose-living citizenry of Adelaide traipsing the city sprint circuit in their unmentionables, to the Love Velo Seaside dinner at Port Willunga Beach.

The barefoot dinner on the beach is conveniently held next to Maslin Beach, home to the Pilwarren Maslin Beach Nude Games and its best bum competition.

With sand between our toes and the sun slowly setting over the water, we work our way through four courses of home-grown delicacies – Spencer Gulf prawns, Fleurieu beef – washed down with beers from McLaren Vale's Goodieson Brewery and choice bottles from Leconfield and Richard Hamilton Wines.

Adelaide, meanwhile, has gone mad for two-wheeled transport, with cycling oddities such as towering bikes and penny-farthings being ridden around the Torrens Parade Ground for the final stage of the tour along the city's tree-lined streets.

Perched in a grandstand on King William Road near the Torrens River, under the dappled shade of plane trees, we have the ideal vantage point to watch the peloton race the long stretch from St Peter's Cathedral, past Adelaide Oval and Elder Park to Government House on North Terrace.

Typically South Australian, there is a festive atmosphere of fine food and wine, with no crushingly long wait for food or frustrating queues for the bar. And we have an uninterrupted view of the race rather than the back of other spectators' heads.

As the riders surge past again to the rattle of bells, peel of sirens and whooping cheers of the crowd, it is not hard to imagine them casting a few envious glances our way.

In the competitive world of professional cycling, the ochre winner's jersey belongs to spectators of the Tour Down Under.

Qantas, Jetstar and Virgin Australia have regular flights from Sydney and Melbourne to Adelaide. Driving from Adelaide to McLaren Vale takes less than one hour.

The Retreat at Chapel Hill, 1 Chapel Hill Road, McLaren Vale, is located in the heart of this wine-growing district, with more than 50 cellar doors and and top restaurants. The Guest House is $400 a night. See chapelhillwine.com.au.

Andrew Taylor was a guest of the South Australian Tourism Commission.

This story Santos Tour Down Under travel guide: Vino and velo first appeared on The Sydney Morning Herald.