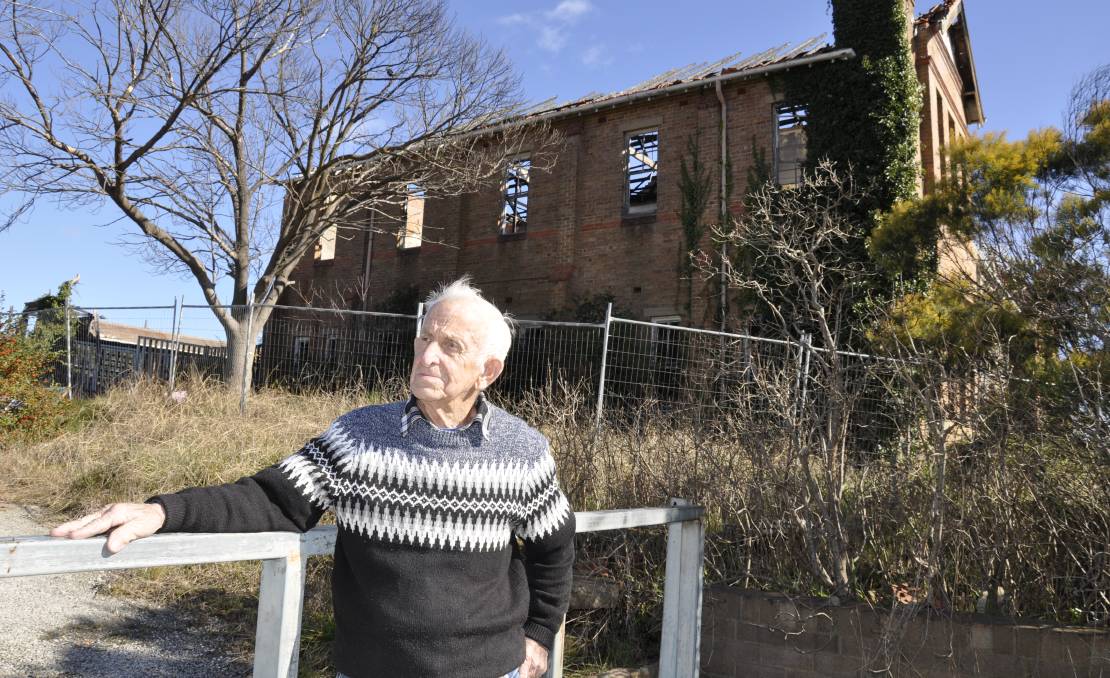 Alan Gilroy does not like returning to the place where he spent six years of his childhood in the 1940s.

The 85-year-old has good memories of his treatment but surveying the "derelict" building brings a pang.

"I think it needs a bulldozer right through it," he said of the former Saint John's orphanage in Goulburn.

"If it was as good as the old Saint Joseph's orphanage (on Taralga Road) I'd say keep it but there have been so many fires there it's not worth keeping."

Mr Gilroy, one of the few ex-Saint John's residents living in the NSW Southern Tablelands town of Goulburn, agrees with the council's decision on Tuesday to issue demolition orders for all buildings on the site in the interests of public safety.

Only some heritage elements, including a boundary wall, crucifix and foundation plaque would be retained.

He variously described it as "an absolute disgrace" and "a deathtrap."

Deputy Mayor Peter Walker agreed. On Tuesday, he argued the public safety risk far outweighed heritage considerations of the 1912 EC Manfred-designed building. With successive fires damaging the structure beyond repair and security fencing failing to keep intruders out, people were at serious risk of being hurt or killed, he said.

"I couldn't bear that responsibility," he said.

"There's been a lot of heart break and a lot of damage done to people (who have lived there)...No one has the ability to make the right decision because everyone has different thoughts and beliefs."

The institution was operated by the Sisters of Mercy until its closure in 1978.

The deputy mayor and other councillors rejected a staff recommendation, based on a heritage report, that three exterior buildings, including the former caretaker's cottage, be demolished and a structural engineer's assessment be completed on the main structure fronting Mundy Street. Heritage consultant David Hobbes recommended demolition of the three outbuildings. But, if proven to be structurally viable, "the front portion of the (main) building should be retained, repaired, reconstructed and conserved."

"This would retain a structure containing (about) 12 rooms of various sizes which could be sympathetically restored/reconstructed and adaptively re-used," the report stated.

But if not viable, the complex should be professionally recorded by way of drawings and photographs.

Councillors were not prepared to wait. Cr Alf Walker said he understood the heritage adviser's viewpoint but it "didn't alleviate the serious public safety concerns."

Planning director Scott Martin acknowledged this was a balancing act but recent fires had "flipped the balance" towards community protection.

"There is no actual framework on what is right and wrong but because it's an item of local (heritage) significance, we want to make sure we go through all the hoops and demonstrate it is not viable to keep and that if we're deciding to demolish it, it's balanced with the facts," he told The Post after the meeting.

"It's a big decision because once it's gone, it's gone but at the same time we understand the public safety issue more than anything and there is only so long the community could and should put up with it." 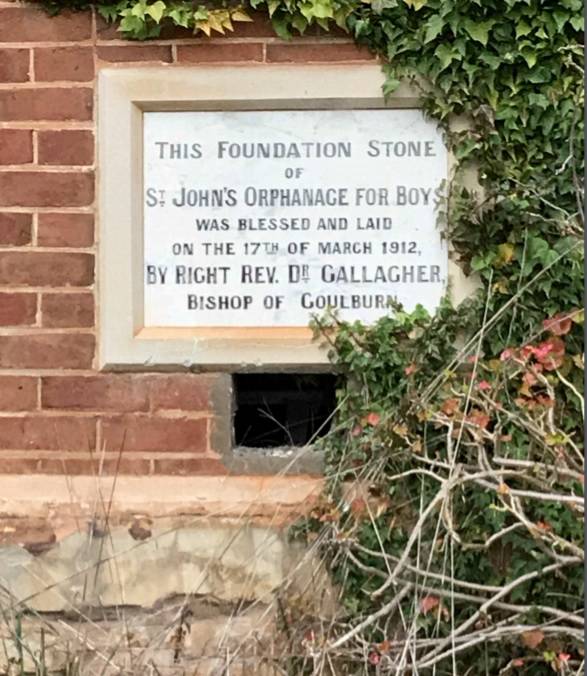 The council and a heritage adviser wants the 1912 dedication plaque to be salvaged and possibly relocated. Photo: Goulburn Mulwaree Council.

Mayor Bob Kirk has previously described the decayed building as a "blight" on Goulburn's landscape, while Cr Walker said on Tuesday it was a "blot on our history."

Cr Margaret O'Neill said she knew of at least one family who had moved away because "they couldn't take it anymore."

"I think the whole ruddy lot should go," she told the meeting.

Owner John Ferrara was issued with emergency orders following three fires in late 2016. One was to secure the site, install warning signs, remove loose roofing iron and structurally assess all fire damaged buildings. The other was to manage asbestos and remove any contaminated material.

But since then security has been consistently breached. Moreover, no friable asbestos identified in 2016 and 2018 reports had been removed, planners' report stated. Both documents described the asbestos as having a high risk hazard rating.

It has not deterred people illegally entering the site. The meeting heard that as council officers and a heritage adviser arrived there two weeks ago, people fled from inside.

Councillors agreed that 30 days to comply with the demolition order was an "unreasonable timeframe" in the current climate. Instead, general manager Warwick Bennett will meet with Mr Ferrara regarding the compliance period and then prepare a report. 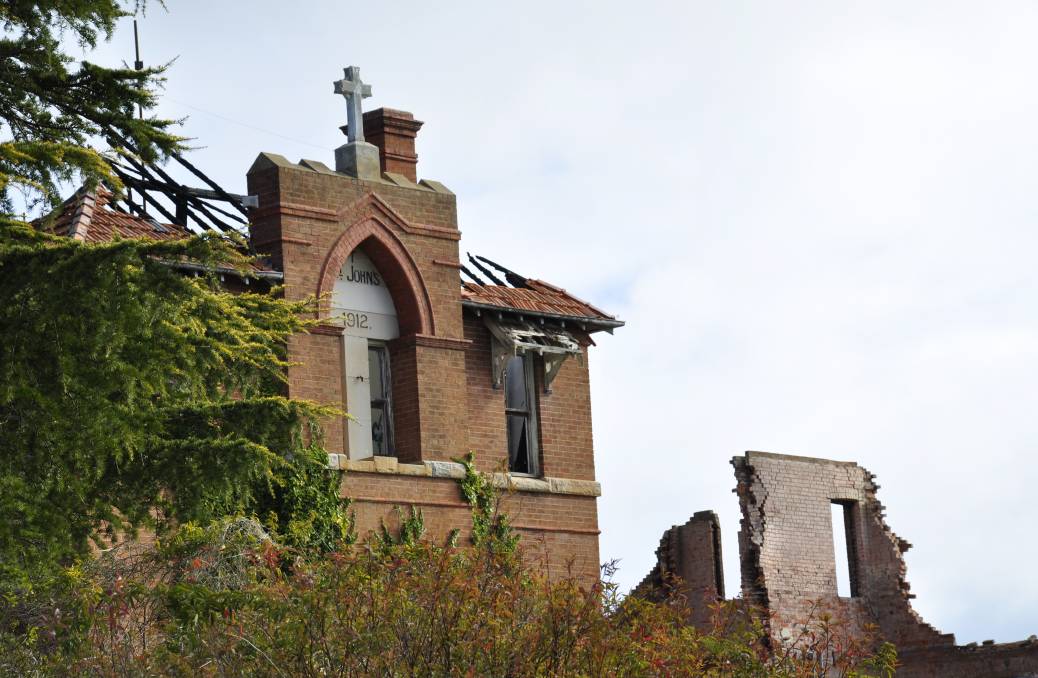 A crucifix on the old orphanage's facade is among the items to be retained. Photo: Louise Thrower.

They also decided that:

Further, Mr Bennett will investigate the council's legal options in regard to prosecution if the owner doesn't comply with emergency orders or starts demolition without regard to the statutory process. Planners said this recognised that the usual maximum infringement penalty of $3000 was "relatively minor" compared to "the ongoing inaction" to repair the site and the public interest.

Cr Leah Ferrara declared a non-pecuniary, significant conflict of interest in the matter and left the room during Tuesday's discussion. Mr Ferrara is her grandfather. Saint John's orphanage neighbour Ron McLaughlin laments the decay of a once "beautiful building" but says demolition is the most realistic course. Photo: Louise Thrower.

Mr Ferrara has flagged plans to develop the site into a six to eight-storey block of residential apartments with underground car parking. He has not submitted a DA and Mr Bennett said plans were very conceptual at this stage.

"They've made their decision and I'll try to comply with it," Mr Ferrara said of the demolition.

"It fits with my plans if they go ahead...I was talking to the council about demolition a month ago so this will expedite things."

As to whether he took responsibility for the building's state, he said this was down to the "derelicts who kept breaking in and destroying the place."

A painting of the former Saint John's orphanage in the 1930s. The artist was thought to be a person named Wallace. Photo supplied.

Neighbours Ron and Christine McLaughlin have regularly heard noises from within the building and witnessed people running away from the property in their 37 years living nearby. About four months ago they said heard an explosion, which was followed by a fire.

"I think demolition is the best option because I can't see anyone restoring it," Mr McLaughlin said.

"It had so much potential as a motel or conference centre or the like. It was such a beautiful building."