Sarah Turnbull's book Almost French might have been the inspiration behind many an Aussie backpacker heading to arguably the most romantic city in the world, Paris. But before it hit the shelves it was the butt of an in-house bet by her publisher.

Her book is the stuff of legends. It was Turnbull's debut novel, which she wrote sitting in chic Parisian cafes after falling in love with a Frenchman. It's the classic fish-out-of-water story, when a young Aussie woman goes travelling and the resulting clash of cultures in the jaw-droppingly beautiful Paris.

Written before Under a Tuscan Sun was published and before Eat Pray Love was released, it was one of the first books like this to be written from an Australian perspective.

Almost 20 years on from the book that made her a household name, Turnbull invited Australian Community Media into her home on Sydney's northern beachesto reminisce. Her home is tucked away just up the road from Paradise Beach and as we sit by a crackling open fire she sinks back into the oversized cushions on the lounge to remember those early days before her book was released. 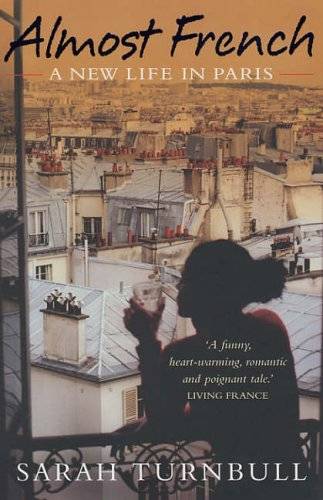 "They had an in-house bet going about how many copies my book would sell," she said of her publisher. "The highest number was and I think it was the head of Random House at the time Margie Seale, she said 10,000 copies. Everyone said 'you've got to be joking, that's not going to happen'," she said.

When Almost French was published in 2002 it became an international success, selling more than 250,000 copies in Australia and another 200,000 in the US and Britain.

Turnbull might have been a print and television journalist for years, but writing her first autobiographical novel was something totally different.

"When you're sitting in your office writing a book, the idea of it actually being read is quite abstract in some ways," she said. "I had no expectations at all, I was thrilled to get a little advance so I guess I always knew it was going to be published."

Readers couldn't get enough of the love story between Turnbull and Frenchman Frederic Veniere. They also loved her honesty and humour, and who can forget when she describes going to the bakery in her tracksuit pants in Paris and Frederic being appalled that she'd done so. ("But it's not nice for the baker," he told her as she arrived back to their apartment.) 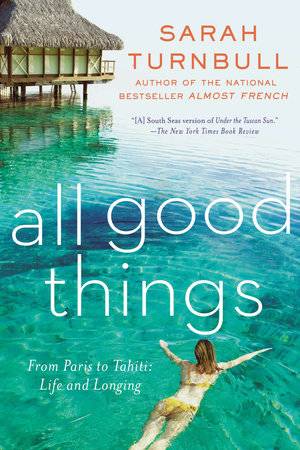 Her next book, All Good Things (2013), was borne from different experiences. After nine years of living in Paris and years of failed IVF attempts to have a much-wanted child, the couple leapt at the chance to dramatically change their lives when Frederic, a lawyer, was asked to set up a Paris law firm many miles away.

"When the opportunity to move to French Polynesia came up, it wasn't a destination that we'd ever thought of living," she said.

"Certainly a big part of the reason we said yes was by that point we just needed a change. It wasn't that Paris was the problem or anything like that, I think when you're in that cycle of failure after failure, when an opportunity came up for change we just thought 'we're going'. Kayaking in a lagoon in Mo'orea with Oliver.

"There was something about being in Tahiti, all this stuff about not being stressed and it'll happen naturally," she said. "It's all bulls**t, it's such bulls**t, and of course I became more stressed than I ever had been there. A small island can be a pressure cooker."

After three years there, the couple moved to Australia to give IVF one last go and she says they "were incredibly lucky". Their son Oliver is now 15 years old.

All Good Things was written after Oliver was born and Turnbull said she felt obliged to write with honesty about their reality of trying to have a child. "It doesn't work for so many couples and for some people that's absolutely fine and for other people it's a real source of ongoing pain," she said. "I felt that being very, very lucky I had an obligation to be really honest about that and not sugar-coat it."

These days, she's completing a Doctorate of Creative Arts and as part of that is writing a biographical novel about Australian impressionist artist John Russell, who lived from 1858-1930. Russell spent 25 years living in Paris as an artist before moving back to Australia. While this is a departure from her first two books, there's a lot of similar themes - living abroad, making a home somewhere else, coming home, creativity and art.

At home with Sarah Turnbull 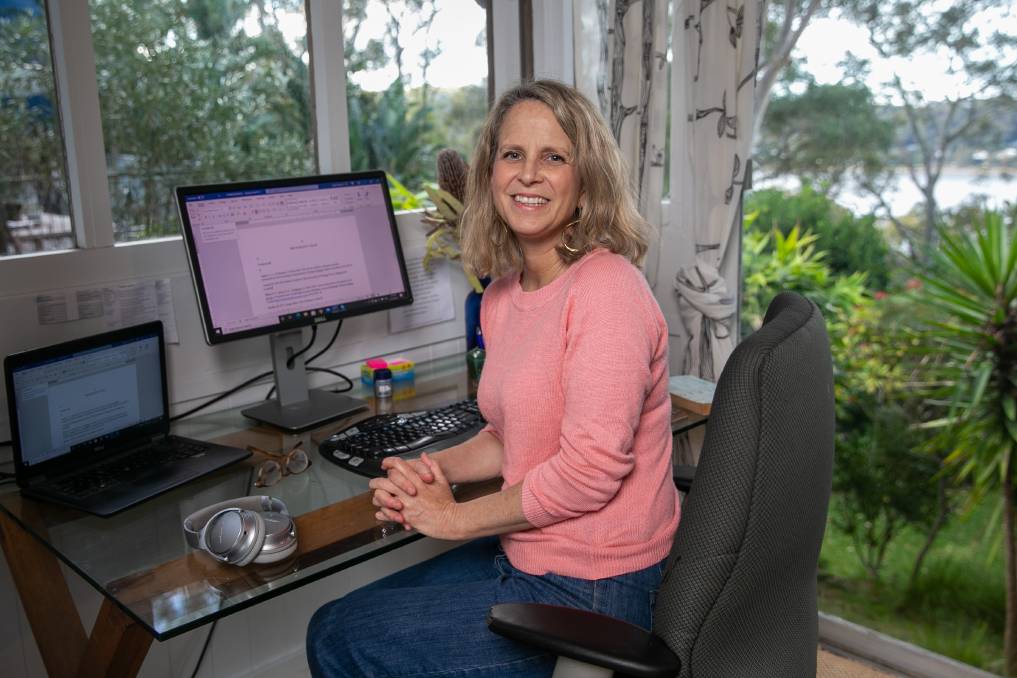 Turnbull's home is filled with creativity and art and is a nod to their travels, her writing and Frederic's art. It was once owned by sculptor Robin Blau and his welded metalwork still adorn parts of the home, which is set across three buildings on a picturesque hill overlooking Careel Bay.

The family's quarters fills one building and Turnbull's writing studio, complete with large window overlooking the bush and Pittwater, is in another. Frederic, who is an avid painter when not practising law, has the third building which he uses as a studio, just down the meandering path.

The pen is mightier than the sword

Turnbull is hugely passionate about the environment and has become a keen letter writer. Her first letter was written two years ago and prompted by Scott Morrison's non-attendance at the UN Climate Summit in New York when the PM was already in the US at the time. The PM's no-show coincided with environmental demonstrations back in Australia which she took part in.

"I was so frustrated and furious that I felt that we were being so poorly represented that I started writing letters," she said. "I was very concerned about the Australian federal government's lack of action on climate."

The federal government's lack of action has been noticed overseas, Turnbull says.

"It's really upsetting to hear and to understand how Australia's image abroad has been damaged by this and I'm not sure a lot of Australians realise that," she said.

"I think we've gone from enjoying a really good reputation, and Europeans and French people seeing Australia in a positive light, to being seen as a country that's not pulling its weight in this really critical respect and a country that's thumbing its nose at efforts to act and to do something and saying 'we'll do what's in Australia's interests'. Well, we're all part of one planet so that's nonsense we can't carve off Australia from the rest of the world." 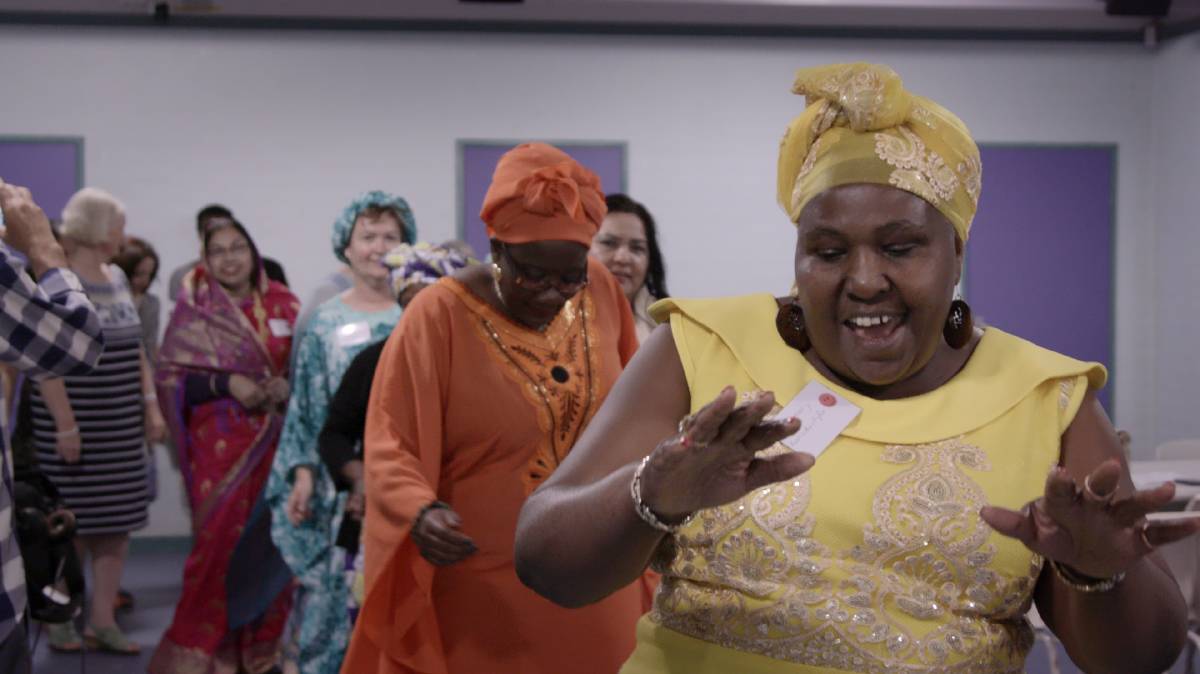 Rosemary Kariuki will be at the Avalon screening of Rosemary's Way in August.

Sarah Turnbull and her sister Anna have teamed up to help bring the documentary Rosemary's Way to Avalon cinema next month. It tells the story of Rosemary Kariuki who fled war-torn Kenya as a refugee and since her arrival in Australia has been changing lives as an advocate for migrant and refugee women in Western Sydney.

"I was just completely blown away by the film, I was completely captivated from the very beginning to the end," Anna said.

In 1999, after fleeing political conflict in Africa and surviving domestic violence, Rosemary arrived in Sydney as a refugee with little more than a suitcase and $250. Since then she has become a force of power and community empowering migrant and refugee women.

She is the multicultural community liaison officer for Parramatta Police and specialises in helping migrants who are facing domestic violence, language barriers and financial distress. In January, 2021 she was honoured with the Local Hero 2021 at the Australian of the Year Awards. Rosemary Kariuki (seated, wearing yellow) will be at the Avalon screening of Rosemary's Way in August.

Anna, who is a lawyer, saw the documentary first, then Sarah, and together the duo contacted the distributor and Avalon cinema's Roy Mustaca to get the film to the northern beaches.

"Some of the women in the film talk about never having really been beyond their local supermarket," Sarah said. "It just seemed so shocking that people could live in the same city and not have been to the beach or experienced wonderful places we're so used to."

The documentary appealed to the sisters who said their mother worked as a physiotherapist in the disability sector and her last job before retirement was in Sydney's western suburbs in many of these same communities.

"We grew up hearing some of these stories from Mum about just how isolating it is and there can be language issues," Sarah said. Anna admits it's quite an emotional documentary and it left her feeling inspired.

Sarah is hopeful the documentary will help connect communities. "I think if we can understand other people's experiences we become less judgemental, we become more compassionate," she said.

Rosemary's Way is on at United Cinema in Avalon on Wednesday, August 11 at 7pm. The screening will be followed by an exclusive Q&A with director Ros Horin, and Australian Local Hero Award recipient Rosemary Kariuki. Click here to purchase your tickets.

This story How Sarah Turnbull won a bet and became a bestselling author first appeared on Northern Beaches Review.