Some lined up at the pub at 11.59pm to get a taste of the ice-cold tap beer they've been missing for 112 days. Others woke up early to get to the hairdresser to colour the roots that had been neglected since July.

Melburnians brust out of lockdown on Wednesday morning, basking in the sun on an unusually warm day and ducking into shops for the first time in 15 weeks.

The first moments of the end of Melbourne's lockdown were filled with sounds of excited chatter, coffee machines brewing and clinking glasses. A welcome change from months of dull nights sitting at home in front of the TV.

Luisa Flores took the opportunity to take her 11-month old daughter Selina out into the fresh air, sitting together at a South Melbourne Markets cafe legally for the first time in months.

"I feel like I've been in lockdown since she was born. It's taken a toll on me definitely, especially not being able to see friends and being locked inside," Ms Flores said, bouncing Selina up and down.

"But when the announcement came I texted all my friends to organise catching up, and I actually met with one friend today."

Melbourne residents have spent most of the past seven months adhering to strict stay-at-home orders enforced by the Victorian government.

Until Wednesday, people could only leave home for four reasons: to exercise, for work or study that couldn't happen from home, for essential shopping, or to deliver care. Under the strictest lockdown, even hairdressers and retail stores closed down. 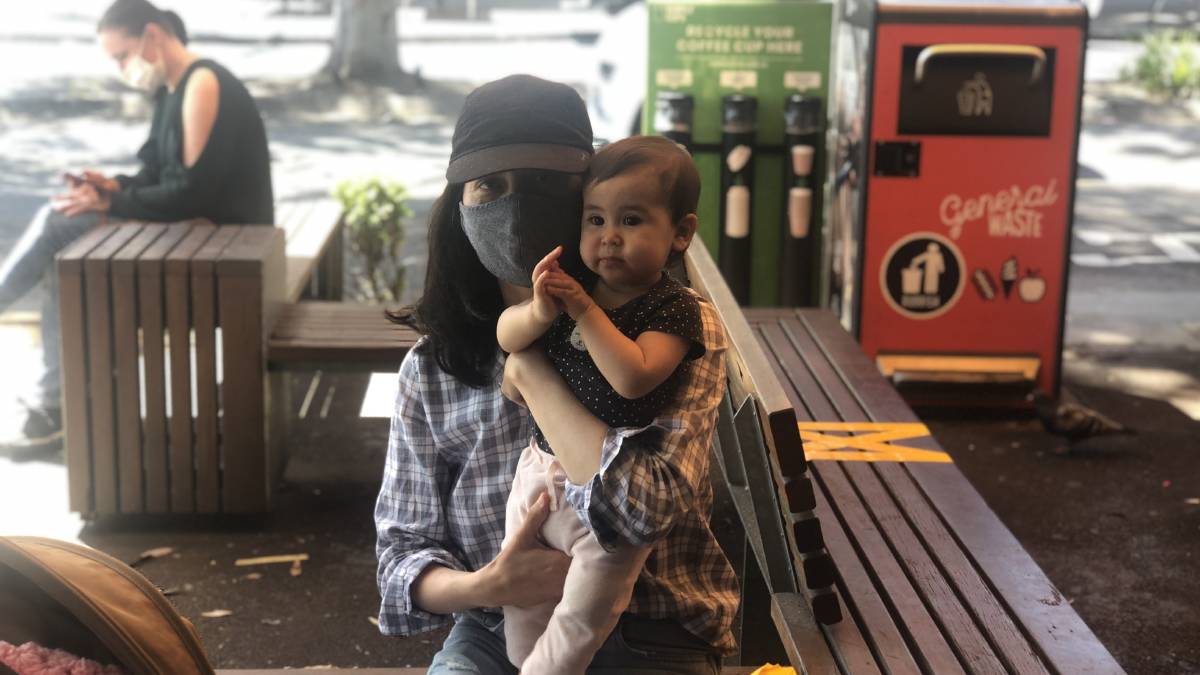 Luisa Flores was on her way to get a haircut to celebrate lockdown ending with her baby daughter Selina. Picture: Katie Johnson

Ms Flores said she was taking the opportunity of lockdown lifting to get her roots coloured after spending many months of hiding her greys.

"This cap I'm wearing is not by choice, it's a necessity," she laughed.

Ms Flores was not alone. Hairdressers have been flooded with booking requests. Specialist curl hairdresser Neel Morley said he had to take his system offline to cope with the influx of appointments.

"I put 20 cancellations up and they were gone within one minute," he said.

While 30 per cent of his clientele usually comes from interstate due to his specialised services, Mr Morley said his business hadn't suffered with coronavirus border closures, because the local demand remained so high.

"We've been rescheduling people since April, so we're finally working our way through those appointments."

Melbourne first entered lockdown in late March. Restrictions eased slightly in June, before the city returned to a strict lockdown after a second wave of cases peaked in July.

Melbourne recorded a peak of 725 new cases in a single day in early August. More than 800 Victorians have died from the virus.

Measures to stop the spread of the virus have hampered people's mental health.

Laura Hamilton and her 81-year-old mother Evon have been isolating together and said the effect of the lockdown had taken a mental toll.

"We were so happy when the announcement came, everyone is," Ms Hamilton said after grabbing a Turkish gozleme at the markets..

"The biggest impact of the lockdown has been on mental health. Not being able to socialise, and missing milestones has been hard. We all needed the hope and the ability to look forward to something, which we have now." Some venue owners have criticised the Victorian Government for not giving more notice ahead of restrictions lifting. Many pubs and cafes on Brunswick Street remained closed. Picture: Sophie Raynor

Fitzroy resident Lizzie Kennedy said the prospect of seeing friends again after a ban on visitors during lockdown brought her nearly to tears.

"We're having two friends, from the same house, over for pizza on the rooftop tonight," she said. "I might cry!"

Cafe owner Dave Wright, who has been able to take dine-in customers for the first time in months, said the vibe has been "cautiously optimistic".

"Lots of people are excited to be able to sit in and be able to drink coffee out of ceramic mugs rather than a take-away cup," Mr Wright said, toying with the coffee grinder.

"We opened at 6 and by 6:30 we had our first dine-in customer. We've had a busier day than we've had for the last six months. We can only have 10 customers though which isn't a lot - but it's better than nothing."

The team at Brunswick Street's Token Toasties point to the tram stop directly in front of their building when asked why they're not seating diners outside.

Others have replaced scattered subside milk crates with real tables and chairs for the first time in months.

Fitzroy resident Myriander Fitzgerald took her puppy Eddie out for an iced latte to celebrate.

"We've started the very important job of training our iso-rescue dog to be true 'Fitzroyalty' and sit quietly under the table in a cafe garden," she said.

"Next step, sitting quietly under a table in a beer garden next week."

The sudden end to lockdown has meant a mad scramble for many businesses to get organised.

Fitzroy's popular Sacred Heart op shop won't re-open until next week, due to the volume of donations to process.

Manager Damian Brady thanked locals for not dropping off items outside the store during its four-month closure. 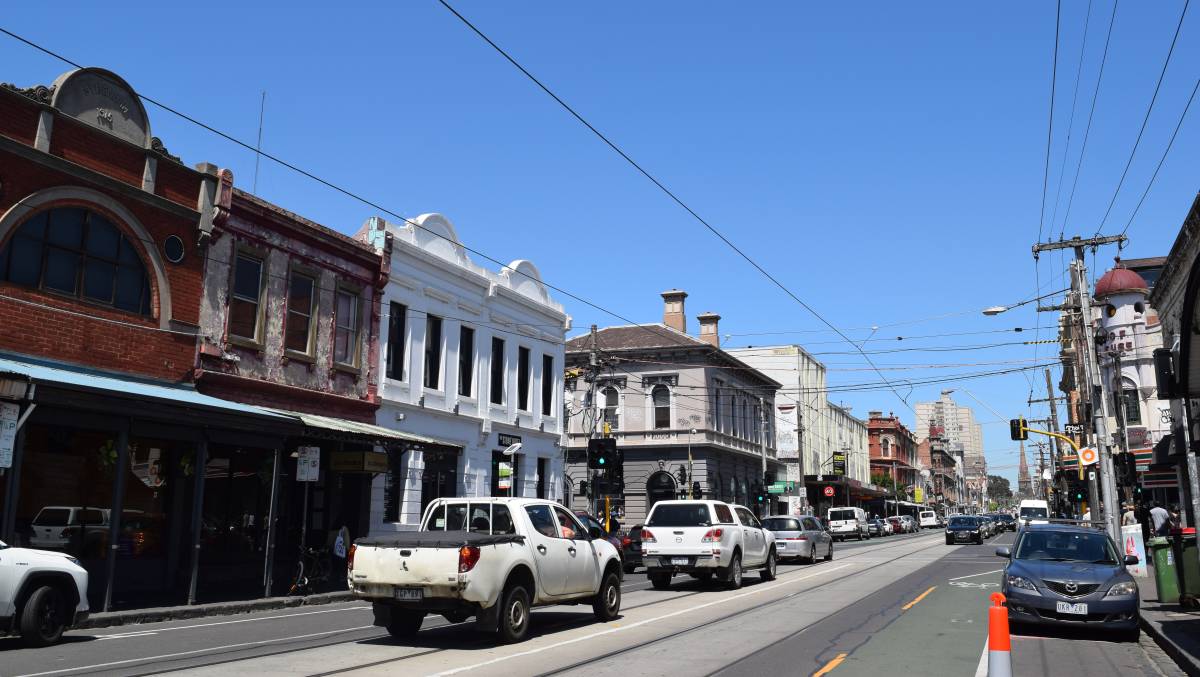 For others, the mere 24 hours' notice given by the Victorian government to re-open was even more unsettling.

The government faced criticism for refusing to specify when businesses would be allowed to open.

While the news of two consecutive days with no new cases was exciting, Golden Fleece Hotel owner Sam Austin said he was left feeling "terribly anxious" about everything that needed to be done to open up his pub after the announcement finally came on Monday.

"I woke up this morning feeling overwhelmed. We had essentially converted the pub into a liquor and home meal takeaway store during lockdown and now we had to work out how to retain what we had while opening up to customers again," Mr Austin said.

Jason Cameron from Brunswick Street's Near & Far was in a similar position.

He converted the double-storey bar into a takeaway wine shop when lockdown first hit.

At lunchtime today the bar's tables remained upended and the floor covered in dust. With one hand on a recycling bin and the other on the bar's door, he said Near & Far would resume dine-in service to a booked-out space at 4pm.

"We've got to organise our COVID safe plans and dust off things we haven't used for 6 months. We're miles away from where we should be."

When asked whether it was nice to serve dine-in customers again, Mr Austin was hesitant.

"I'll feel better about it tomorrow," he said with a smile.

This story 'I might cry': Melbourne shakes off 112 days of lockdown first appeared on The Canberra Times.