Friday, December 23, 2016, mightn’t mean much to the average person, but for Kade Rixon, it’s a day he’ll never forget.

That was the moment things hit home for the Melrose soccer coach and he vowed never to have another bet.

To the naked eye, he’s a positive, happy-go-lucky man, but behind the mask was a desperate and lonely individual that didn’t understand the chaos he was causing around him – all from gambling.

The old saying “never judge a book by its cover” couldn’t be more appropriate.

Rixon, now 30, had his first bet as a 16-year-old in Melbourne with a group of school friends who “all loved to get involved with the punt”.

It was four or five years later that he knew he was in a bit of trouble.

“Every day after work, I’d be going to the pub and spending my whole pay packet,” he said.

“It gets to a point where your mum looks over your bank accounts and she can see you’re taking $200 out every 10 minutes and trying to cover your tracks is a bit hard.

“I actually said to my partner at the time, I remember winning quite a few hundred on the Saturday and went back to the pub on the Monday and I just had no courage.

“I actually sent her a message and said there’s something I need to tell you and I told her then that ‘I’ve got a gambling problem’.

“Obviously for a 20-year-old girl, she had little idea how to control that and I was at the races again that following Friday.

“I thought because I’d said it, that was it and I was fine.” But it was far from fine for Rixon, whose addiction continued to spiral out of control – horses were his downfall.

“I remember one day through soccer season and I’d won $2500 on a Saturday night and went down before soccer (on Sunday) and the idea was to collect it,” he said.

“Within the hour it was gone, I’d done the whole lot and you sort of have to front up to soccer on the back of that.

“You then go up to the pub after soccer and all the boys are eating and having a beer and you’ve got nothing there at all.

“Your excuse is you can’t eat after you play and you’re just going to drink water.

“The boys must have thought I was an athlete and thought I always looked after myself, but the truth is I had nothing.

“There was nothing there.”

Rixon received the coaching cheque at the end of the 2016 season following his first year in charge at Melrose, but admitted two days later he was asking his mother for more money.

“She said ‘what did you do with your cheque?’ and I was already pretty deep in then, so I confessed what happened and she broke down and said she can’t do it anymore,” Rixon said.

“It breaks your heart with what you’re putting other people through, especially your mum - she did everything.

“I grew up with the best childhood, they looked after me and did absolutely everything for me and I guess the whole time I’m gambling I’m thinking I’m not hurting anyone else - I genuinely believed that.

“When you see your mum break down like that, it sort of hits home, but even then, it didn’t stop me.”

It finally came to a halt on that day in December, under emotional circumstances.

The Rixons were gathered for Christmas and it was the first for the newest member of the family, Kade’s nephew.

While everyone was sitting around the Christmas tree opening presents and celebrating, Rixon was in tears.

For the first time in years, he had money set aside to spend on family at Christmas time, but it was all gone before his eyes.

“That day was black and white, you talk yourself into not wanting to be around anymore,” Rixon said.

“You can't do anything, you feel helpless, you feel pathetic because any time I got paid it was gone in a day or two. “I was working in Wagga for four or five months, clearing over $2500 a week, getting paid on a Wednesday and by that Friday trip home you’re still betting on the horses and get to the weekend with nothing left.

“It was just a constant cycle, you build up a debt and it gets to a point where you think you’re that far gone and there’s no coming back.

“That’s what I kept telling myself, and, on the back of that, you visit some very dark places.

“I was borrowing a lot of money, stealing from my family and lying to get money.

“I racked up over $20,000 worth of debt to the point where I was trying to look up Nimble loans to get 500 bucks and even they’re knocking me back.

“It makes you sick to think you’ve hurt the most important people in your life and the ones that have always looked after you, the reality is you’re stealing from them.”

Griffiths visited the Rixon household on Christmas Eve in 2016 and laid it all on the line for Kade and the family.

“It wasn’t to help them understand, it was to get me to be honest and open up exactly how far deep I’m gone,” Rixon said.

“It was agreed then that I only had my bank card and my mum and my sister would look after all the online banking and they just put money in the card, I could never get cash out, it was all by card.

“That was the turning point for me.

“The next two weeks over Christmas was the roughest time I’ve ever had, but I feel like on reflection I’ve grown a lot on the back of that.”

Rixon then started to attend weekly Gamblers Anonymous meetings, which he still does to this day. 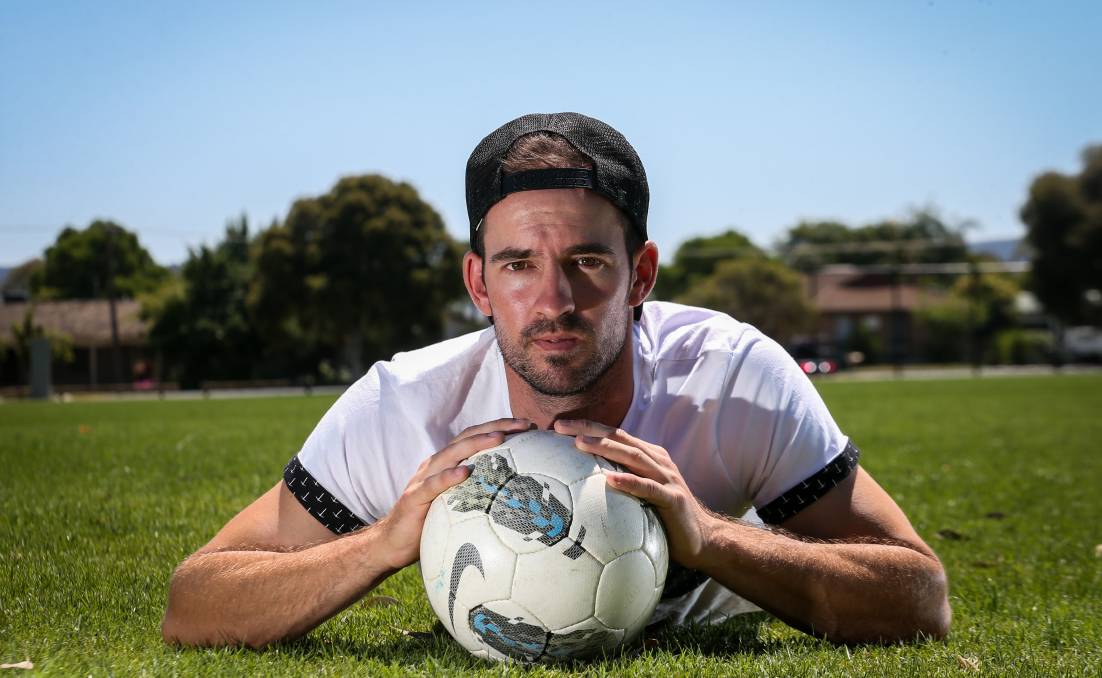 He’d tried talking to family, he’d visited psychiatrists, but it was having the chance to meet people on the same journey that proved to make all the difference.

“I remember the first meeting I went to and I didn’t know what to expect, I didn’t know if these people were going to be homeless, you just don’t know, but they were such good people,” he said.

“It made you believe it’s an illness and you’re not a bad person for feeling the way you do.”

An honest discussion with his mother, Sue, earlier this year really opened his eyes to what was happening to his loved ones.

“One thing that goes largely unnoticed is who it does affect and I guess as a problem gambler, the common thing is you’re only hurting yourself, you’re only spending your money, you’re not living the life you could and no-one else is being affected,” he said.

“She went through it all and I spoke to her for the first time about how she felt.

“It was raw and she said she felt like she’d failed as a parent, she should have seen signs and if she had her time again she’d get a mortgage out on the house and send me away for help.

“She often rang (my brother) Trent, which I found out later on, and she would cry over the phone about what else she could do.

“The reality was, there was nothing else anyone could do, it was for me to come forward and get everything out, which is something I’ve never been good at.

“Now I’m an open book to anyone and everyone, I encourage people to message me about their gambling issues, I’m not an answer, but I’m happy to help where I can.” Rixon was an electrician from the age of 17 up until two years ago when he moved into disability support, which he feels has given him a greater appreciation for everything and everyone around him.

He decided to go public with his addiction on Facebook, which he believes has kept him accountable and given other people an avenue to reach out.

His next goal is to study to be a counsellor, specialising in gambling addiction.

Rixon knows he can’t gamble again, but doesn’t hold it against anyone who does.

Recovering gambling addict Kade Rixon has enough strength to say ‘no’ to gambling, but it wasn’t always that way.

Rixon, who hasn’t had a punt for 619 days, racked up thousands of dollars in debt from sports betting before finally breaking the cycle.

It took every ounce of his being to resist the temptation of reverting back to his old ways.

The frequency of gambling advertising on television provided its challenges.

“The AFL probably makes a lot of their money off the back of being sponsored by the betting agencies, so I get why they do it,” Rixon said.

“In my own negative mind, I think you’re making money off people’s struggles, that’s how I look at it.

“You do have fleeting moments, even still when you see that you think, ‘that’s a nice price’ or ‘they should probably win that’, but I’ve got the recovery up now to smile and say that was the old me.

“I get why they do it because people do make a lot of money from advertising it, but I guess for a small minority they hate seeing it all the time.

“I can’t say it really affects me, it sort of irks me a little bit, but I’m not against gambling, I just know I can’t.”

Three or four months into his recovery, Mr Rixon put his willpower to the test when he attended last year’s Albury Gold Cup.

“They always say it takes three months to break a habit and I felt like I was always going to be thinking like that,” he said.

“It always got me down, but after those three months, it was almost like something clicked and I felt pretty comfortable.

“I went to the Gold Cup with some mates and put limits on myself.

“I had a marquee, I had food and drinks the whole day and I handed my wallet over.

“One thing I found that now I’m not gambling on the AFL or the soccer, I can actually sit there and enjoy the game.

“I fully understand I can’t gamble, I’m comfortable around it and if I wanted to, I could sit there and watch the races all day and it wouldn’t tempt me. I just don’t feel the need to put myself in that position, you’ve got to break the cycle, which I have.”

But whilst in the thick of the addiction, Rixon felt he could make people believe whatever he wanted.

“To judge a book by its cover is pretty easy to do, and they say gambling is the silent killer and that’s probably why, you can’t see signs,” he said.

“I get a lot of positive feedback like ‘you’re looking a lot better’, but I’m not doing anything different, the only difference is I’ve woken up and I’m enjoying life.”

Rixon hopes to become a counsellor and help others with gambling problems.